Katymarie Frost never had a shortage of stories in her head, but she knew she wanted to be a writer from the moment a librarian called her “the next J.K. Rowling” after winning a writing contest when she was only ten or even years old. It has been her dream to share the many tales her imagination has created and to give others a springboard for their own imaginations to take flight. Since then, she has started many different literary endeavors, but the first one she has been able to finish was what has now become Gateway to Aviandria, which she is hoping to release this fall.

How would you describe your story in one sentence?
Ashlynn is quite content with her ordinary life as a college student, but all that changes when she is hurtled into a completely different world where she is forced to confront cruel kidnappers, a manipulative tyrant, and a decision that could obliterate her chances of ever returning to her home.

What inspired you to write your story/characters/theme?
I have been writing stories for most of my life, but the idea of Aviandria, the setting where most of my story takes place, was inspired by my best friend in college. She told me about a world she had created that included elements of magic and mythical creatures, and I thought it sounded like fun to do something like that for myself. At first, it was more of a game to see if we could come up with viable countries, complete with government systems, economics, demographics, geography, ecology, and all those sorts of things. Then we started writing short stories incorporating our countries. Those morphed into longer stories, and eventually one became what is now Gateway to Aviandria.

Which authors have influenced you?
I have a large list of authors who influenced me to write. A few of these would include Mark Twain, Louisa May Alcott, Sir Arthur Conan Doyle, Edgar Rice Burroughs, Cheri Maude, J.K. Rowling, and Baroness Orczy. Those authors who influenced what I write the most would probably include C.S. Lewis, J.R.R Tolkien, Lloyd Alexander, Terry Brooks, and Chris Heimerdinger.

Which are your favorite literary genres?
I love fantasy and science fiction, but I also really enjoy historical fiction, mysteries, and some of the classics.

What makes a book/story special for you?
I would have to say the thing that usually wins me over in a story is the characters. When I can actually feel like the characters are my friends and I start feeling the same things they are feeling and caring about what happens to them, they almost become real people to me. That is when I start loving the story. Then, of course, I would have to say happy endings. I love happy endings.

Where do you live? Did your hometown/country/culture influence your story?
I live in Utah surrounded by mountains. These mountains influenced a lot of the geography in parts of Aviandria, but I have also taken many elements from other places I have visited. I was going to college in Rexburg, Idaho when I wrote a lot of this story, and that was a huge influence as well, especially when I am describing my main character’s ordinary world in the beginning of the book. I’m sure my culture influences my writing more than I am even aware of. I don’t know that a writer can entirely escape being influenced by their culture. If I look at it closely, many of the ideals and values of my characters are the same as those I grew up with.

How long did you need to write this book/for your first draft/ for your revision/editing process?
I’m guessing it took around a year, possibly a bit more to finish the first draft of my book. I had to fit it in around going to college full time, so I didn’t get to write as much as I would love to. After that, I set it aside for a time while I focused on writing other stories, school, and other important things in my life. Since then it has gone through several revisions. Those didn’t take as much time as the first draft because I at least knew where I was going better. Right now it is in the final editing phase, and that is taking more time because I have to work with other people’s timetables as well as my own.

What have you learned while writing and publishing? Did unexpected things happen?
While I was writing, I learned to keep an open mind and be flexible with some things in the story. Sometimes characters almost seemed to have a life of their own and would do unexpected things, or my friend would throw in new ideas, and I learned to incorporate those. It’s fun reading through plot twists, but it’s almost more fun writing through them.

What helped you to get inspired and overcome hurdles along the writing of your book?
I fell in love with writing it, so I really wanted to get it done. Sometimes it did get hard, and I would get stuck, but because I really wanted to finish I found things that helped motivate me. One of the things that helped was talking about it, especially with my friend who inspired me to write it. It helped to be able to send her snippets I had just written to get feedback. Another thing that would help was to visit with the characters, whether it meant getting to know them better through extra character development, or trying to draw them. Sometimes I had to go back and read favorite passages I had already written. Other times it helped to read something written by somebody else, just to recharge my creativity. Really, it was mostly my craving to write that carried me through. It often just called to me, so I wrote.

What would you do differently on a next project?
I don’t know if there was a lot I would change because writing Gateway to Aviandria was what I wanted it to be. It was something I had fun with and enjoyed, which was the number what reason I wrote it. Perhaps in the future, I will do more planning and plotting before I write much, but if inspiration strikes, I don’t mind simply starting to see where it goes.

Best piece (s) of advice for first-time writers?
Don’t give up. If it seems hard, keep going. If you don’t know if anybody else will ever read it, keep writing. Write it for yourself first and foremost. You never know when the opportunity to share it with the world will come up. Even if you don’t think it’s good enough, still write it.It can always be improved, but even an imperfect story is better than no story at all. If you don’t write your story down, who will? Something amazing could be lost. Think of writing a book as your own adventure. You often get more from the journey than the actual destination. If you can enjoy the journey, you will reach the destination sooner or later. Work hard, keep going, but don’t forget to have fun and enjoy the process.

Where can readers contact you on the internet? Do you have a blog/website?
Readers can find my contact information as well as more about me and my book at http://www.katymariefrost.com. I also have a blog on that site where I write about things that influenced and inspired my writing, extra details about my book that aren’t found anywhere else, and any news regarding the upcoming release.

What are you planning to write/publish next?
Right now, my primary goal is to release Gateway to Aviandria. If all goes well, I’m hoping to do so this fall. After that, I actually have a sequel written, though it needs some major revisions. After Gateway to Aviandria is published, I plan to start those revisions and work toward publishing the sequel. 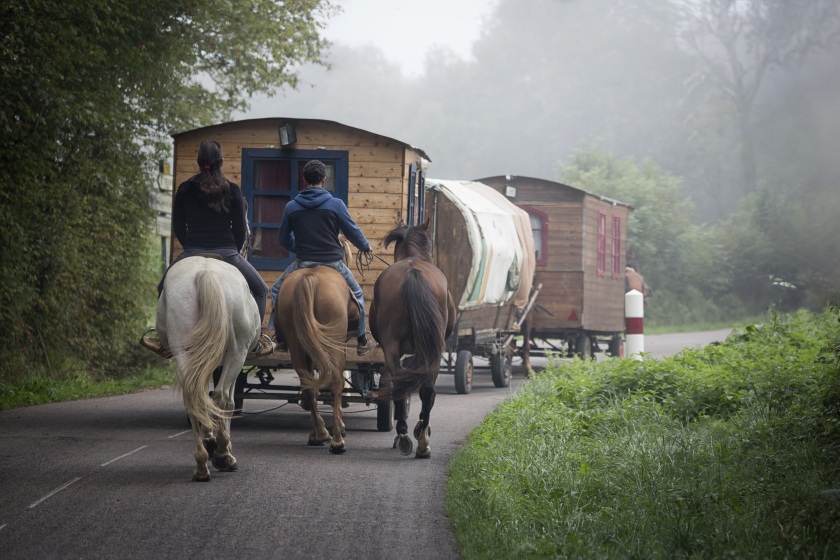 1 – Reality can be harder than anything you imagine

When I first started researching, I didn’t think this would be at times emotionally challenging.

Sixteen years ago, when I wrote the short story I’m now developing into my novel, the plot already had a Sinti protagonist whose Sinti group had been slain by the people of the fictitious middle-age village of my story.  I was shocked to discover that such massacres indeed happened when reading books about the Sinti. I won’t dwell on this and other sad historical facts, but research confirmed my notions about how terribly the Gypsy and their subgroup, the Sinti, were persecuted along history.

Looking into middle-age also showed how hard life was at that time too. This had a sobering effect and brought a broader view of my story world. It showed the painful and hard side of it. I could then have a glimpse of all the pain and the challenges in a deeper and more concrete way. Reality proved much harder and shocking than anything I had previously imagined.

2 – The research will give you a truthful underlining of details for your characters everyday life.

As I went on reading the book from Michael Krausnick (Eine Sinti-Familie erzählt. Da wollten wir Frei sein) about the Sinti, the author talked about how the Sinti played with self-made instruments, how their violin was vital to them.

It also talked about how they were always used to the wind and open air and preferred wooden wagons to stonewalls, which they considered too warm and unnatural, or that winter fat hedgehogs were considered a delicious treat. That a marriage among them wasn’t arranged, but that usually the pair would just run away and after a period, when they should be away from the upset parents, they would be considered married.

These were only a handful of important Sinti life facts I would not know if I hadn’t researched. I’ll try to include that in my story world because those facts belong to the historical world and society of my novel. All these facts give me a perspective sometimes painful and tragic, sometimes beautiful and artistic of their way of life.

And this is what stories are about, other human perspectives.